TCL 10 Pro review: A solid performer with an elegant design 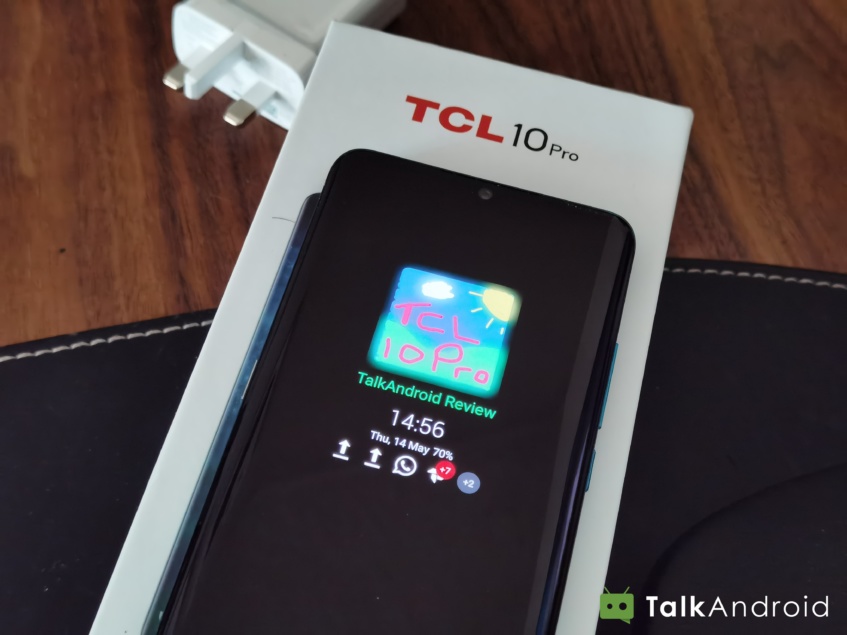 Best known for its value-for-money televisions, TCL has also been in the smartphone game thanks to its licensing of the BlackBerry and Alcatel brands. Now that the licensing deals have expired, TCL is taking the knowledge and technology it has developed and producing smartphones under its own branding. Having recently launched its new 10-Series of handsets, we’ve been lucky enough to spend a couple of weeks with the middle-of-the-range TCL 10 Pro that sports quad cameras, a curved AMOLED display, and an eye-catching metal and glass design.

Join us after the break for our review of the TCL 10 Pro. 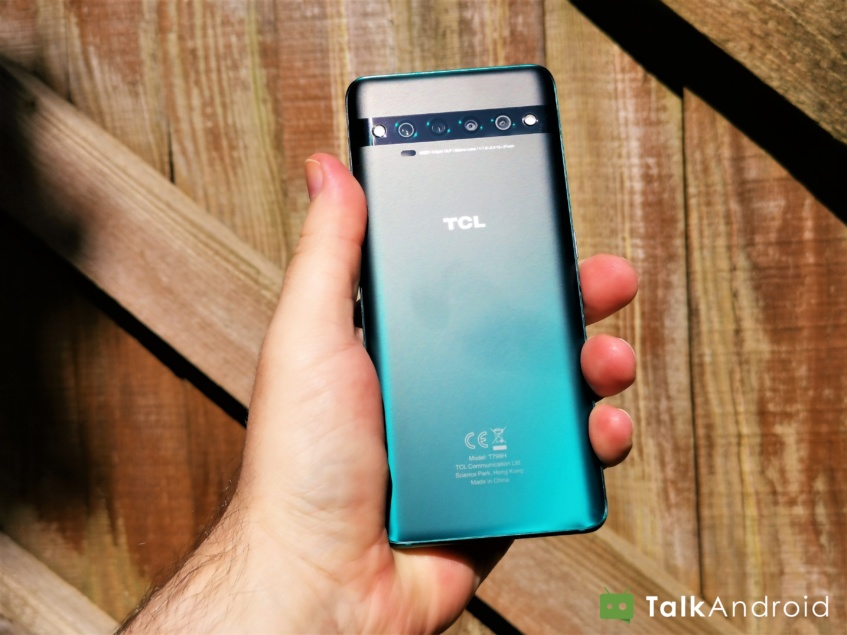 With its curved display and selfie camera notch, the TCL 10 Pro looks like many other smartphones available today from the front. The rear panel with its horizontal strip of cameras and the simply gorgeous Forest Mist Green finish is what gives the 10 Pro its elegance. The gradient finish of the colorway is lighter at the bottom and darker at the top, and its hues catch the light in a way that few other finishes do. In the hand, the 10 Pro is a little slippy, as most phones with glass panels are, so you may want to slap on the transparent case that TCL has thoughtfully included in the box. 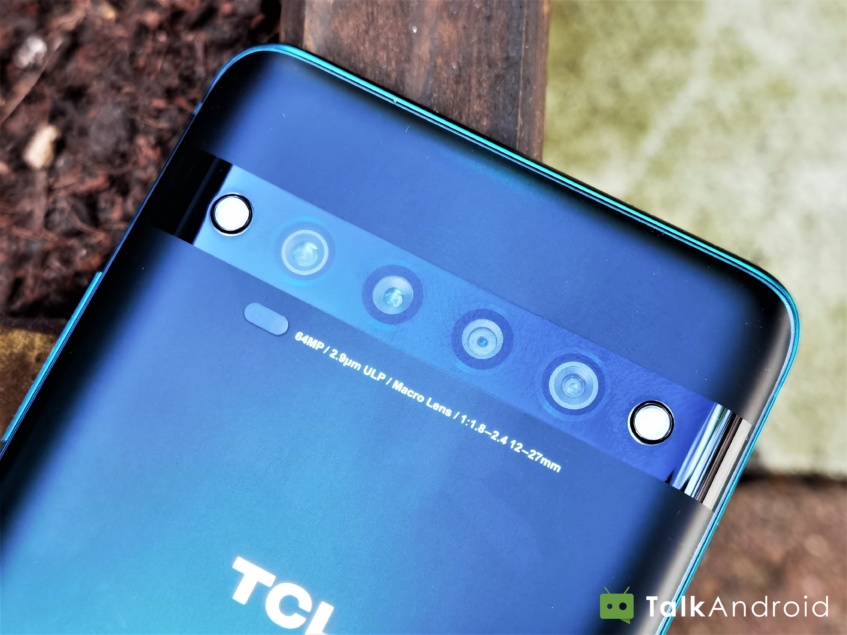 The TCL branding is tastefully located below the seamless rear camera housing where you’ll find not one, but two LED flashes, and there is a dedicated Google Assistant button on the left edge. 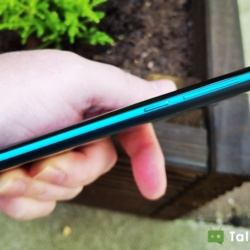 The power button and volume rocker are on the customary right-hand edge and you’ll be glad to note that there is a 3.5mm audio jack present on the top edge along with the IR blaster. 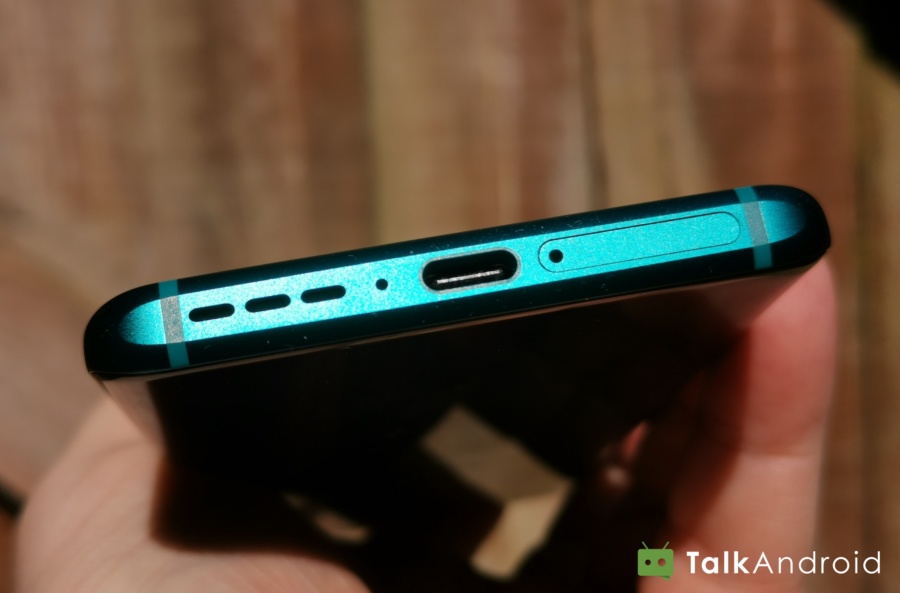 The bottom of the phone is where you’ll find the SIM tray, USB-C charging port, and the speaker chamber. 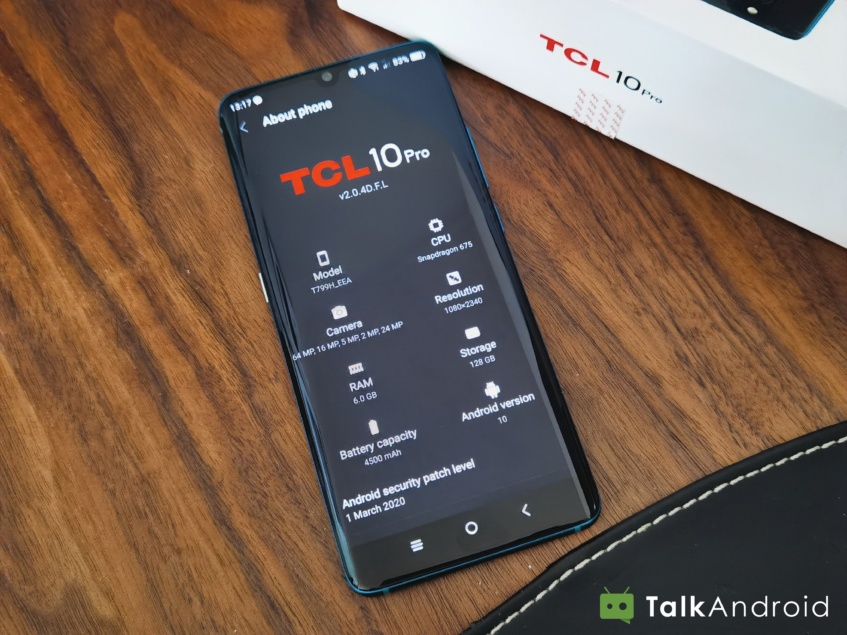 The AMOLED display is easy on the eyes and colors are as sharp and vibrant as you would hope. The 10 Pro is great for watching movies and shows on, whilst the Reading Mode takes the strain off your eyes and the battery. Besides the included dark mode, the display also has Eye Comfort Mode that removes 66% of harmful blue light from being emitted. 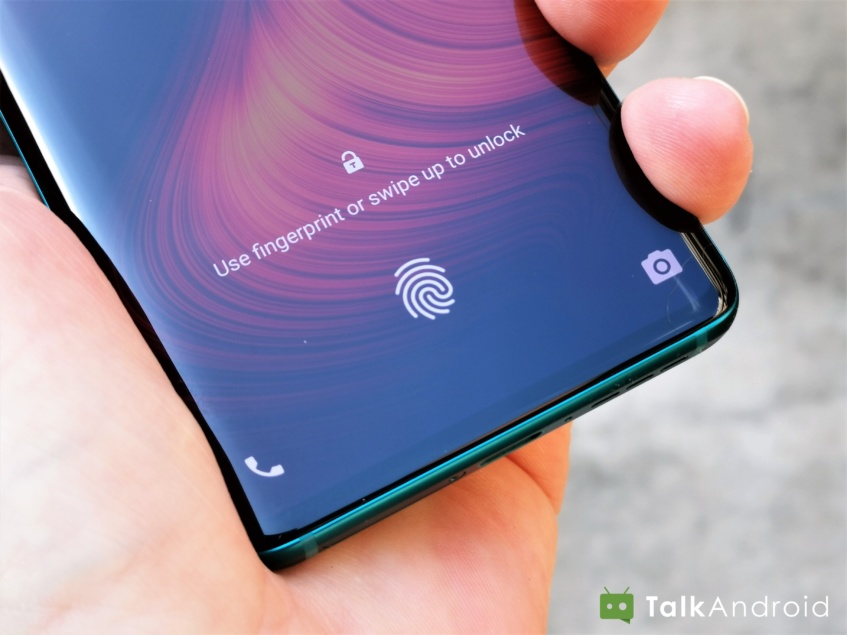 The in-display fingerprint isn’t the most advanced or accurate around and this is perhaps the single most frustrating issue with the TCL 10 Pro. Although a recent update certainly improved its performance, I found myself relying on the less secure Face Unlock.

With a Snapdragon 675 processor under the hood, the 10 Pro isn’t going to be taking on the likes of OPPO’s Find X2 Pro head-to-head. Combined with the generous 6GB of RAM, though, the phone opens apps and games quickly enough, in two weeks as my daily driver I’ve not been frustrated by the overall performance. Loading times of games such as Call of Duty Mobile are noticeably slower in comparison with phones such as the OnePlus 8, and gameplay was responsive, however, you may want to reduce the graphics load for a better experience.

We’ve run the phone through a few benchmarking apps and posted the results for you below. 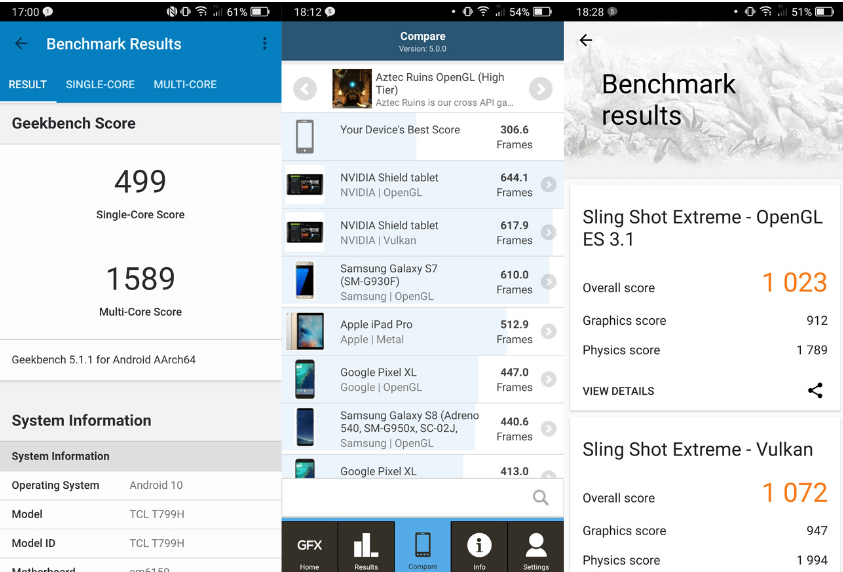 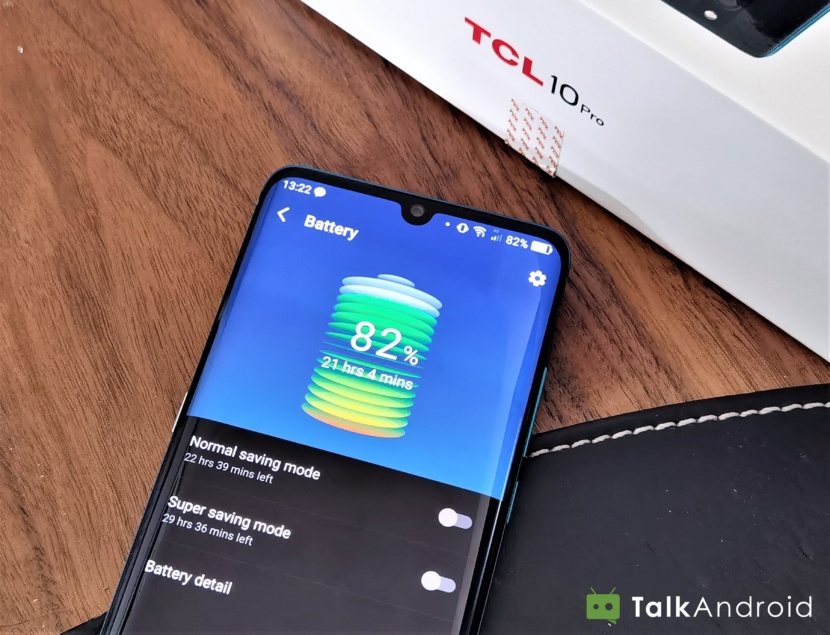 With 4,500mAh of battery capacity, the TCL 10 Pro will get your through the day with ease and around 20% left in the tank at midnight with my normal day’s usage. Once empty, you can top off the battery from 0-50% in around 30 minutes thanks to the presence of Qualcomm’s Quick Charge 3.0 technology. While it’s a shame that the 10 Pro doesn’t have wireless charging, it does have the ability to reverse charge if you need to use it to top up another device. 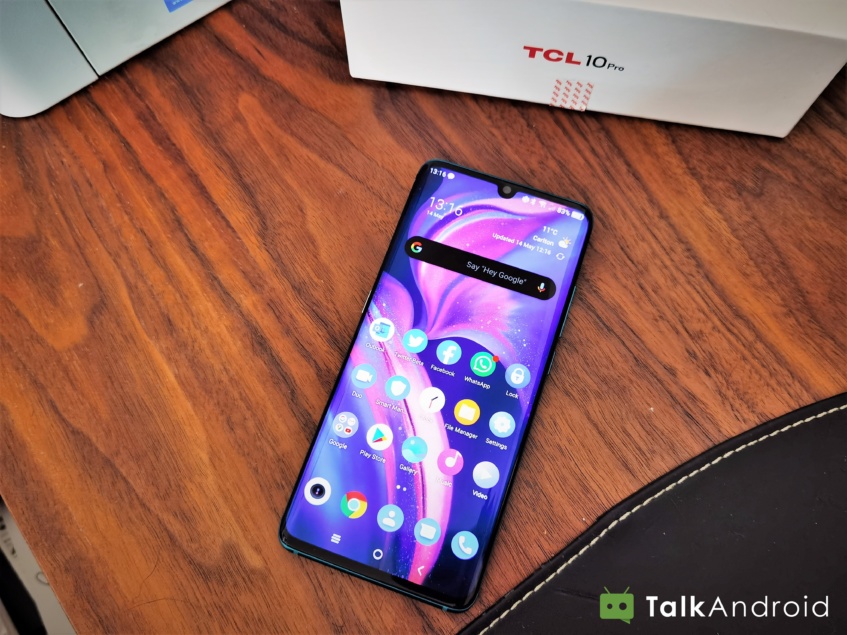 The 10 Pro launches running Android 10 out of the box with the brands’ own TCL UI software running on top. There’s no need to be sad, though, because TCL has done a great job on its custom overlay with its lightness and user-friendliness. It’s not stock Android by any take, but TCL UI has a ton of added features that stay out of your way if they aren’t required and a host of options when it comes to customizing your smartphone experience. 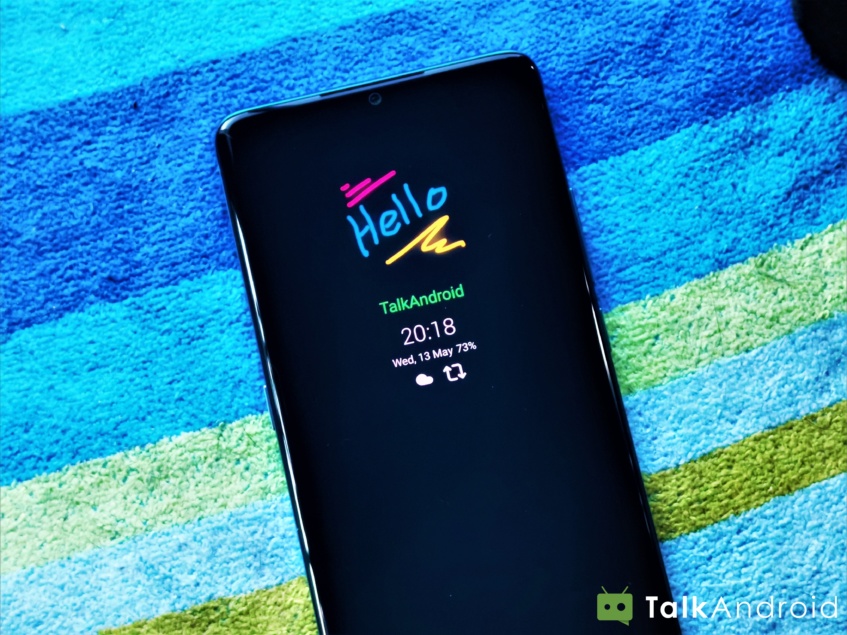 We recently wrote about how OnePlus was finally adding Always-On-Display to its AMOLED-equipped handsets, well the TCL 10 Pro already has it, and Ambient Display out of the box. You can customize the AOD from the selection of pre-installed styles or you can use the built-in editor to make your own design that absolutely no one else will have (as you can see from the image above).

The NXTVISION Display Engine enhances the visual experience by upscaling SD resolution video to HD resolution with increased contrast, amplified colors, brighter highlights, and darker shadows without overdoing it. Super Bluetooth is a handy feature if you want to connect up to 4 Bluetooth speakers or headphones simultaneously so you can listen to the same content with others, and while it’s not something I would use often, it worked as it should when I tested it out.

In lieu of an LED notification light, the 10  Prohas the option of edge lighting to notify you of an incoming call or message which lights up twice. It’s a feature I first experienced on the OnePlus 7T Pro McLaren Edition and my only complaint about it is that I wish you could set it to illuminate more than twice.

You can either let the Smart Key open up Google Assistant by default or you can head into Settings to select from a pre-determined list of apps or a range of actions to interact with system apps.

Other than those little niggles, TCL UI is easy on the eyes and quite inoffensive to use. The phone is currently on the March Security Patch which, seeing as the phone is just launching, we would like to see updated to April’s patch sooner rather than later. TCL will hopefully keep on top of software updates and the monthly security patches in the months ahead, it’s certainly something that we will keep an eye on and report back on. 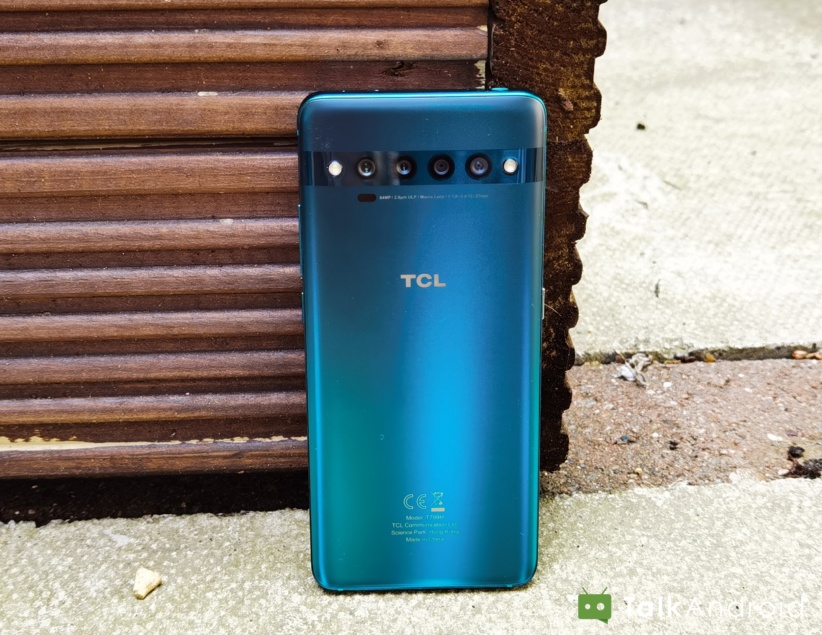 We come to one of the most important aspects of a modern smartphone, the ability to make us, our pets, and our surroundings look good. TCL endowed the 10 Pro with four rear cameras in a flush housing with an LED flash on either side. In a nutshell, the TCL 10 Pro is dependable enough and produces images of decent enough quality, but class-leading they are not, unfortunately.

Consisting of a 64MP main sensor with a dedicated 16MP telephoto, 5MP ultra-wide, and 2MP macro cameras, the 10 Pro isn’t short on hardware. But there seems to be a lot of post-processing going on that results in over-sharp images and saturation, and the cameras themselves are a tad sensitive when it comes to exposure levels. But, the level of detail is generally good while the colors are vibrant enough.

The 24MP selfie camera produced a good quality image, coping well with the greenery and my quarantine style hair in blustery conditions.

As you can see from the images taken in low-light conditions below, the regular image is far more yellowed than the Super Night Mode which is much clearer, but not at the same level as Huawei’s P30 Pro which is still the gold standard in this area. 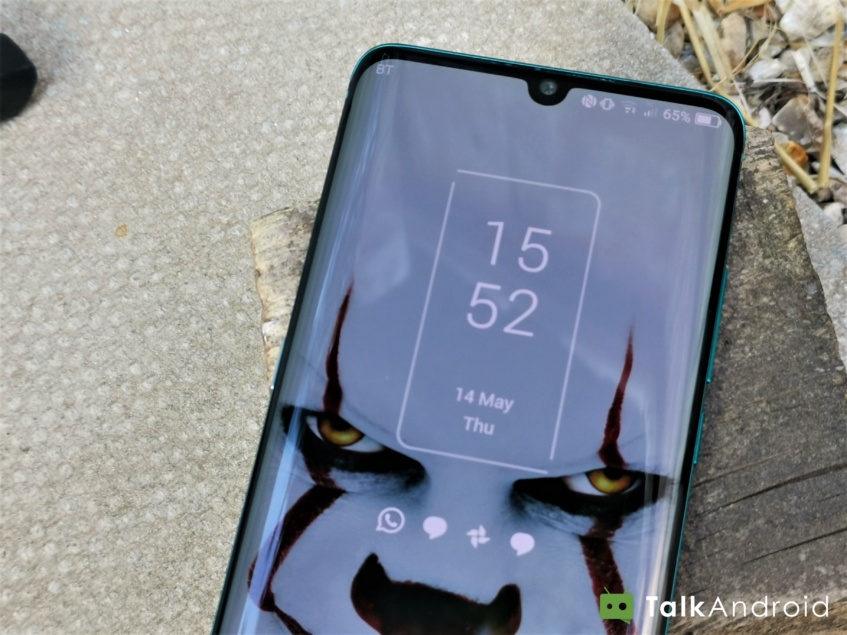 TCL’s 10 Pro is something of a conundrum in that it’s a great phone to use so long as you aren’t focussed on the specifications list. It has a fantastic finish and the horizontal camera strip helps it stand out from the rest of the smartphone world, regardless of budget. Despite the choice of processor, performance is perfectly fine, the TCL UI software is surprisingly good, and the overall user experience is great.

At this level, it would have been great to see an official IP rating and perhaps even wireless charging to flesh out the list of features. It’s also plain to see that while the 10 Pro produces images that are fine for most usage cases, TCL needs to work on its cameras because they simply don’t stand up to cheaper competitors such as the cheaper Pixel 3a, or the OnePlus 7T that costs an extra $50 for a definitive step up in hardware across the board.

Having said that, the 10 Pro is a great first step for TCL that is making its debut in the crowded US smartphone market and I can’t wait to see what comes next. Sure, there are areas to improve upon, but the TCL 10 Pro is a solid performer and a phone that is worth taking a closer look if you are in the market for a phone that stands out from the crowd.

If the TCL 10 Pro tickles your fancy, you can pick it up in the US from around May 19th and the UK from the week beginning on June 1st.

He’s been an Android fan ever since owning an HTC Hero, with the Dell Streak being his first phablet. He currently carries an OPPO Find X2 Pro in his pockets, a Galaxy Tab S5e in his backpack, and thinks nothing of lugging a 17-inch laptop around the world. When not immersed in the world of Android and gadgets, he’s an avid sports fan, and like all South Africans, he loves a good Braai (BBQ).