Realme had a confidence boost after its first flagship – the X2 Pro – and now it’s time for a proper sequel well equipped to battle not only flagships but flagship killers as well. Meet the Realme X50 Pro – one of the first phones kitted with the Snapdragon 865.

It took Realme a while to make a top-tier device, but the X2 Pro was indeed the answer to many users’ requests. And now with the X50 Pro, the maker is entering the big league with a bang. The new flagship has a large AMOLED screen with HDR10+ and 90Hz refresh rate. Then it boasts the latest and greatest Snapdragon 865 chip complete with a 5G modem.

Moving on to the camera – it’s the same as on the X2 Pro. The main setup has a 64MP primary, an 8MP shooter for both ultrawide and macro photos thanks to its advanced autofocus, then it has a 12MP zoom camera with 2x optical and 5x hybrid zoom, and finally, a 2MP depth sensor completes the whole thing.

But while the main camera did not receive any updates, the selfie shooter has seen a major overhaul. It is now a dual camera with a 32MP primary and an 8MP secondary for ultrawide shots. Also at the front, but out of sight, is the impressive under-display fingerprint reader we first saw in the X2 Pro and OnePlus 7T series. 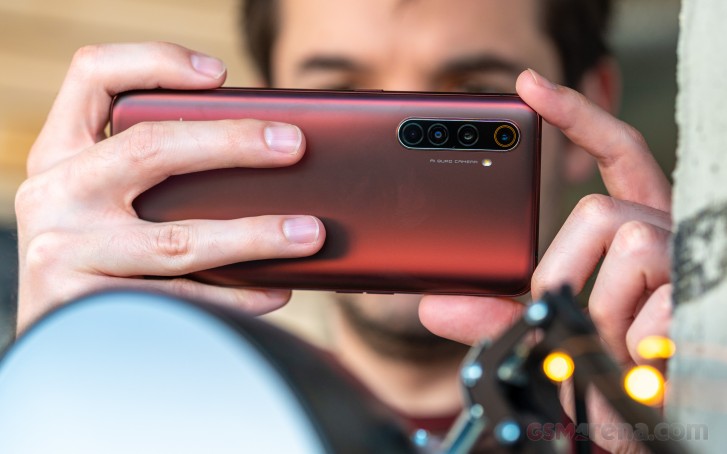 The Realme X50 Pro is also the company’s first smartphone to support the new 65W SuperDart Charge and it should fully charge your battery in half an hour!

Finally, the Realme X50 Pro is running on the newly developed Realme UI 1.0 based on Android 10. And it’s also going after the Oxygen OS with the embraced pureness, clutter-free interface, and hidden powerful tools.

We would have appreciated some ingress-protection, but we guess the splash-resistant nano-coating is the best Realme could do right now.