Oppo Reno3 Pro may sound familiar as a phone under that name was released back in December but only for its home market in China. A month later, the handset is finally making its way to international markets but surprisingly, in a slightly different package. To say it’s a completely different phone would be an overstatement because there are only few differences in specs but they are key enough to make the end-user experience considerably different.

For one, the global version of Reno3 Pro keeps things simple with a flat display, instead of a curved one like on its Chinese sibling, but adds a second camera on the front. The change to a flat display can be considered as a plus by many, but the extra hole for the second camera looks a bit obtrusive. Still, the AMOLED display on the new phone is excellent, it’s one of the phone’s key selling point.

The chipset is also different from the Chinese version and the international version of the Oppo Reno3 Pro is touting the brand new MediaTek P95 chipset. We are yet to see how it stacks against the competition so it will be one intriguing test.

The global model has an upgrade in the camera department, as it’s getting a capable 64MP sensor for its main camera. We are yet to see how well this new sensor performs when MediaTek’s image signal processor is pulling the strings.

The Reno3 Pro packs a solid 4,000mAh battery and can replenish it fast thanks to the included 30W charger in the box. We also have a full set of camera focal lengths – besides the main cam, there is also an ultra-wide, and a 2x telephoto zoom camera.

It all looks pretty promising on paper, but this segment is particularly sensitive to the product pricing and it’s a cut-throat competition these days. The Reno3 Pro will really need to find a way to stand out from the crowd to leave a mark. So let’s not waste any more time and get straight to our review.

The phone comes in a standard package with all the usual user manuals, the compatible 30W VOOC Flash Charge 4.0 charger, the USB-A to USB-C cable and you also get a free transparent silicone case to show off the cool gradient on the back. 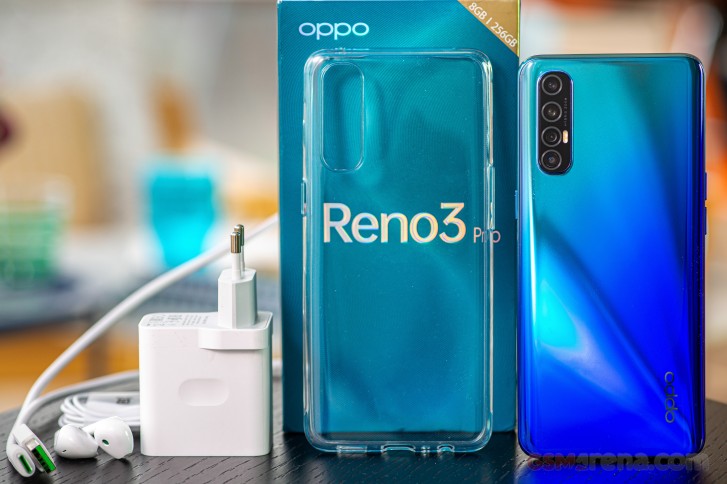